It is an easy drive to Anvaya Cove. With the convenience of the Northern Luzon and the Subic-Clark –Tarlac Expressways, you have more time for family activities. And there are even more to choose from with Subic Bay Freeport Zone’s assortment of shopping, dining, and recreational facilities just 25 minutes away.

Going back at least five centuries, the location of Morong, Bataan is nothing but historic for Ayala Land’s nature child, Anvaya Cove. The resort is officially part of Morong’s municipality, located within the Filipino province of Bataan.

A global debate continues to rage across the globe whether aspects of colonialism benefited indigenous communities. But one of the strongest legacies left behind by the paradisiacal area’s earliest colonists, the Spaniards, has been the strong tradition of Catholicism, something for which Filipinos are world renowned.

At the turn of the seventeenth century, Moron had its first parish or pueblo. Father de San Miguel was the first parish priest, erecting the Church of Our Lady of the Pillar. It is this pillar of faith that remains one of the oldest testaments to the Filipinos’ Catholic legacy.

American guests to this land should be particularly interested in the last colonial invasion of Morong, so to speak. Here is a legacy of history that both Americans and Filipinos continue to commemorate. It is here that a Second World War regional alliance of Filipino and American military forces warded off the then formidable Japanese troops. And it remains fascinating to recall that it took no less than fifty men to secure Morong.

An intemperate climate but colorful culture

Recommended hours for swimming in the sea surrounding the resort is from the early morning hours to well into the evening. From the earliest hours to the bewitching hours, temperatures remain high. But all is well in paradise, as they say. There is room for everyone. The population of Morong remains relatively small.

And getting to paradise is no encumbrance either. Guests make their way to Anvaya Cove by way of the Subic Bay Airport and thereafter the Bataan Provincial express way in order to reach Morong, first and foremost.

Long before the Spaniards came to town, as it were, Morong was really just a small settlement for its local inhabitants. Ironically, land that could be cultivated remained scarce for the indigenous population. This leads to the clue as to why the overall population remains small in comparison to other municipalities across the Philippines.

But it must also be remembered that the municipality is not much larger than two hundred square kilometers. The earliest occupants of Morong ventured to other areas where larger tracts of fertile land could be sourced. 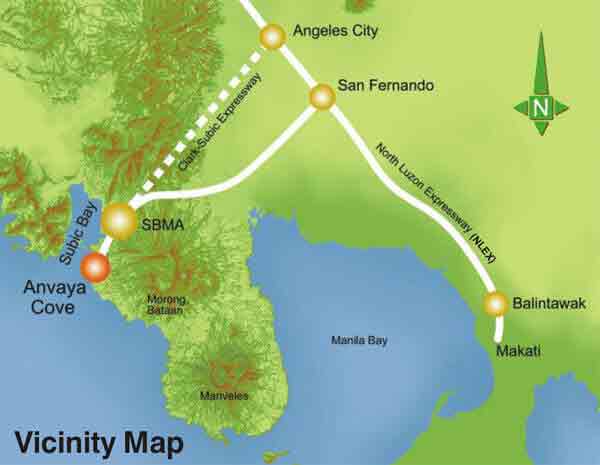